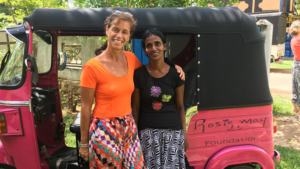 It is quite difficult for women to make a mark in certain male-dominated professions in the world. This is quite justifiable in Asian countries. Three-wheel drivers are mostly males who dominate the streets at any time during the day. In a bold move to earn a sustainable income, several females voluntarily stepped into this profession. Before long several mobile services empowered women to drive tuks and even become commercial taxi drivers. In an attempt to empower single mothers who are at risk of abandoning their babies and children, the Rosie May Foundation initiated the Think Pink Sri Lanka initiative.

The Rosie May Foundation is an international charity helping children, mainly girls, in Sri Lanka and Nepal. Founded by Graham and Mary Storrie after the murder of their 10-year old daughter, Rosie May in 2003. for many years the Foundation operated from the family’s kitchen table in Bottesford.  As a response to the natural disasters that have taken place, the Rosie May Foundation initiated the Think Pink Sri Lanka – a tuk tuk scheme where women drive for women. The charity works in Sri Lanka and Nepal and identifies women and children, especially girls who are more vulnerable in the aftermath of disasters. “It is vital to give women a voice and educate men to reduce gender inequality by challenging gendered roles and breaking barriers,” said Mary Storrie, Director /Cofounder of Rosie May Foundation in an interview with Mirror for Hope. “Think Pink tuks are a mission-driven solution and have the potential to address the grave gender discrimination of women in Sri Lanka. UNFPA Sri Lanka’s study found that over 90% of women had experienced sexual harassment on public transport and only 4% reported this to the police.”

Although there has been an emergence of women driving three-wheelers in Sri Lanka, the stigma still resonates. Personal observations prove that they never remain at a three-wheel stand unless they are booked via a mobile app. “Think Pink Tuks make women drivers visible and provide safe journeys for women and girls to work and school,” Mary continued. “Think Pink is facilitated by a non-profit organisation and gives single parent mums the opportunity to train as a driver. In turn they earn a sustainable income to lift themselves out of poverty by renting a Think Pink Tuk to establish their own taxi service.The vehicles are insured and maintained by the charity to ensure maximum safety for passengers and the driver.Social mobility of women is increased and positive role models in a gender biased occupation are created for future generations to aspire too.”

The concept of women driving for women prevents sexual harassment, giving women the safety and dignity they deserve.Women are trained at a local driving school. They are also trained to manage their own business and household budget. Mary also said that the women drivers are taught English in order to develop conversational skills as lone female tourists would welcome these taxis.

Adding in value to the tourism industry, Think Pink tours are an additional service that will be provided for tourists to give a local authentic experience.

Speaking about its progress, Mary said that the charity has grown organically since 2004 when it first started operations. “It works directly on the ground to respond to the needs of local communities. We have developed good community relationships and continue to reach out to other organisations and work with local authorities as we believe that collaboration is key to delivering high impact and sustainability.”

Currently, Think Pink tuks can be found in Galle and one will not fail to recognize them with their bright pink outlook. Mary also has plans to expand the service in other parts of the country in the near future. If you happen to see a pink tuk on the streets, do not hesitate to go on a ride as you are engaging in a charitable move to empower these women.