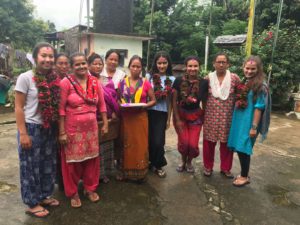 Sarah, Paige and Sasha were warmly welcomed in Nepal.

In August 2018, 3 students from the University of Nottingham took part in our International Internship Programme, researching the impact of a 30,000 litre water tank we had constructed in partnership with local NGO SAHAS Nepal, in a remote village near Chitwan National Park, Nepal. The internship programme was an incredible opportunity for the students to gain first hand experience in undertaking research for an international charity and while immersing themselves in the vibrant and friendly Nepalese culture.

Background Research
Before the water tank was constructed, families, mostly women and children, would have to walk an hour to collect water from the Nyrangi River, or pump it from various tanks. In each case, the water was unfiltered and dirty, unsafe for drinking without first being boiled. Collecting and boiling water consumes huge amounts of women and children’s time, which could otherwise be used for studying or generating an income.

Women and girls were also forced to wash in the open space of the river, often risking their own personal safety. Most families generated an income through the illegal production and sale of alcohol, a process which endangered both the health and livelihoods of families. Families’ diets consisted mainly of corn, the only crop which thrives in local conditions, placing food security at risk during periods of drought and limiting the amount of surplus food which could be sold on for income generation.

Working in partnership with a women’s farming group, made up of 21 members in the village, and NGO SAHAS Nepal, it was decided that constructing a water tank which would pipe filtered water directly into the houses of the members for use by their close and extended family and friends, would transform life in the village.

Transformational Impact of the Tank

The water tank was completed in 2018 and now pipes clean, filtered water directly into the members’ houses. A drip irrigation system is used for growing crops. Students carried out research by conducting interviews, coordinating votes at a meeting of the women’s group, observing the community and measuring indicators such as crop growth, to illustrate the tank’s impact. This research, coupled with monitoring and evaluation carried out by SAHAS, has demonstrated that the tank has so far increased:

Personal Safety– Private personal space has been created for bathing, rather than public bathing in the river, reducing the risk of sexual harassment for women and girls.

We would like to thank Sarah, Paige and Sasha for their valuable contribution to SAHAS’ monitoring of the impact of the water tank. We are overwhelmed by the transformational changes that the tank has created for the community of Devghat so far. 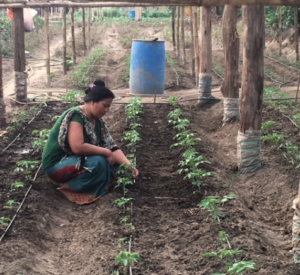